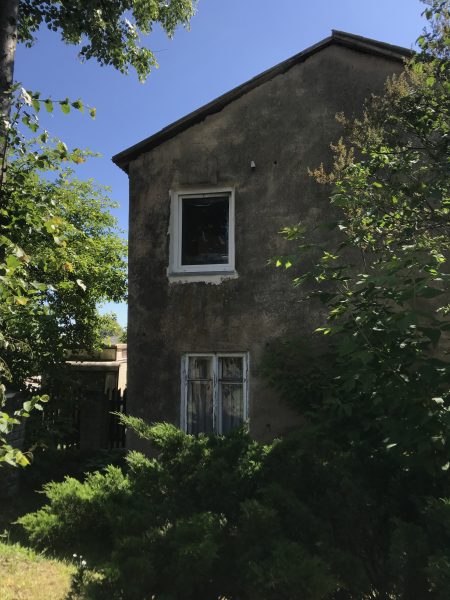 Šakiai (Shaki, Shakyai, Shakyay) is a city that is quite interesting on its own. And as all the cities that we had visited before, this one has rich history tied with Jewish people. There was a modern fountain, standing in the middle of an old flea market. The contrast there between old and new is immense. A big part of this city is surrounded by old, creepy soviet buildings. It was quite a challenge to find the right house belonging to our clients. But as always, we had accomplished our mission. We had found a few houses. One of them was a simple, little store, that specializes in farming equipment. It had been there for a long, long while. It allowed us today, just as in the old days, to buy various things, ranging from tomato seeds to a rake… Close by there was a hotel-restaurant, where we could not find any kosher food, so, unfortunately, it was hard to choose what to eat from the menu. Mostly because we do not eat cheese. After a nice meal we went a bit further away from central square and found an old Jewish cemetery. It was closely surrounded by people, living nearby. After leaving Šakiai, we were faced with the saddest part of our journey – “Batiškių miškas“. It was a forest where over 4000 people were gruesomely shot dead. They were taken from nearby shtetls, Šakiai, and from the neighboring towns of Kruki (Kriukai), Lukshi (Luksiai), Sintovta (Sintautai), Grishkabud (Griskabudis), Sudarg (Sudargas) and many others.. And just as that our journey had come to an end. It was an experience that makes you value what you have. And makes you feel sorry for the hard lives of Jews during the war.. 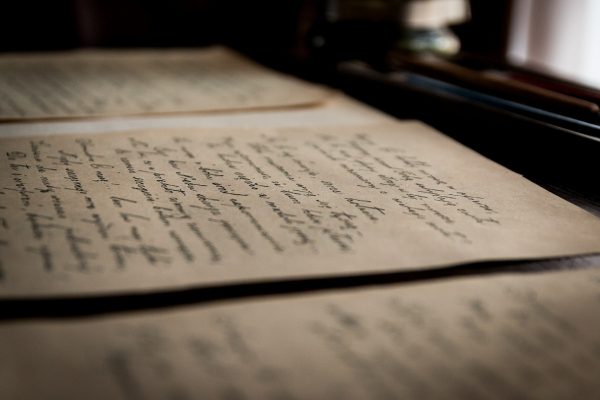 (Finding roots travel, jewish travel). A few people came to us holding a 20 year old letter… It was the last letter they had received from their relatives in Lithuania. So we went on a journey to find the woman who wrote it a long time ago…
We tracked the letter all the way down to a little town located in the north side of Lithuania. A place where people live in a quiet, friendly neighborhood. We knocked on a door of a small wooden house. A stranger opened the door and we asked if a woman, who wrote the letter, lived somewhere near. The man answered:
– Yes, she is my wife…
Tears of joy and happiness were suddenly visible on the faces of people, who have finally reunited with their relatives. And for us – we can proudly say that we had accomplished our mission.

Serijai – a small town with a grand story

Seirijai (Sereje, Serei, Sereye, Seyriyay). As we were riding a train on its narrow railroad, suddenly, our destination appeared in front of our eyes.  A small town named Serijai. While disembarking the train, air fresher than ever before entered our lungs. We looked, around and the harmonious architecture was visible straight away. Small buildings, mostly empty roads where a rare car would pass by created an uneasy atmosphere.  On a hill a few ladies were visible. They were responsibly cleaning the cemetery. They told us that this city was slowly disappearing as each day had passed. We saw a small burial ceremony happening nearby. It seems as though it has become an everyday routine for them to bury a resident of this small town. Close to this new cemetery, there was an old one where tombstones mostly held polish surnames. The second world war has taken a big toll on the people of this town. We walked to the other side of the street where a different cemetery stood. It was a Jewish one. Small rocks with „Jedish“ engravings laid on the uncut grass…
A pastor has led us to an 80 year old woman which had seen the development of this town. Before the war, she said, everything was perfect. Shops, small factories were flourishing, people had jobs. But when the first day of WW2 arrived, everything changed drastically. Germans bombed this town, took every single Jew and ended their lives in a forest. From that day on, the town had no Jewish people at all.. Their houses were sold, and the ones who escaped never came back. The only reminder of Jewish presence were the foundations of old synagogues.. Now, the elders tell stories about the life this city had. About the locations of the stores and factories. What was once a flourishing city is now just a small town, named „Serijai“… 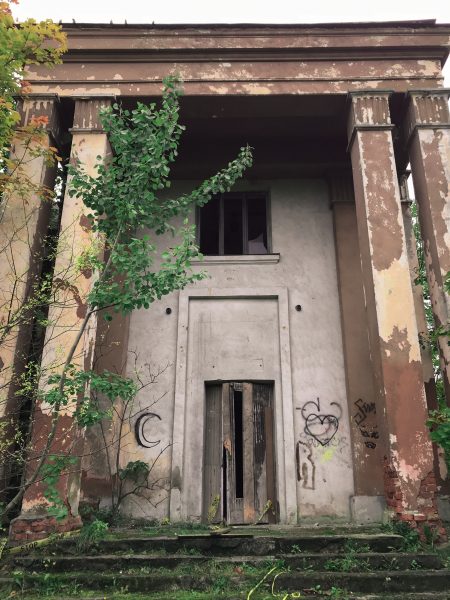 Synagogue for sale. Any offers?

Daugai (Doig, Daugi, Doyg, Dauge). A family from far, far away has always dreamt about returning to their ancestors’ land. It was a small city, called Doig, which was surrounded by the lake. There, a small synagogue stood still. Its condition was terrible – chipped walls, unstable columns and the smell of decomposing wood were not inviting to go inside. Nearby, an old woman lived. She told about an old Jewish family living with her a long time ago. Her house was authentic, never rebuilt, as well as the barn. The woman was deeply upset, because once, instead of the synagogue there was a cinema, cultural centre and a dancing hall. And now, all that is left is just an old synagogue, which is now up for sale. Then we went to see a jewish cementery which was on a small island surrounded by water. It held lines of carefully placed gravestones. It was really peaceful in there.. 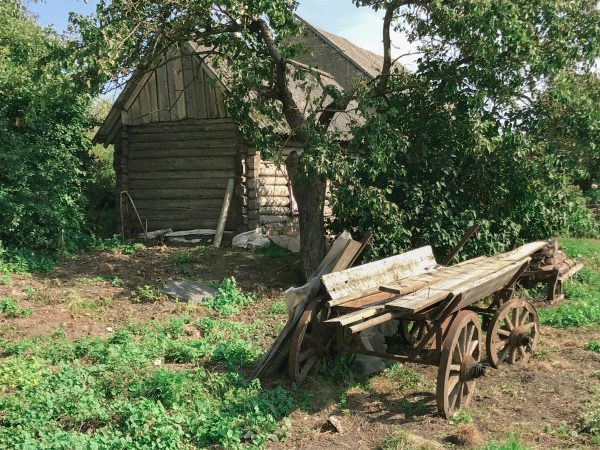 Beekeeper and an Elder

Koziany, (Kozyany , Koziany, Kazan, Kaziany). As we are walking through an old village, we stumble upon a familiar looking building. After taking a closer look, we pull out our phones in order to commemorate the view.
“Hey, what are you doing here? Yes, you! Why are you photographing my house?!” A strange man removes his beekeeping hat revealing an angry face and approaches us.
“Sir, we are just looking for old homes that might have belonged to our ancestors. We are Jews who lived here before the war,” we say in hopes to receive an optimistic answer. And we did get one. The guy told us a story about five other travelers searching for their long-lost relatives in his backyard. Four of them have found the remains they were looking for. The last person, sadly, left empty-handed.
Later old, but highly energetic elder told us the history of this city. He was about 80 – 90 years old. What a blissful experience that was. When the time came to say our goodbyes, we wished him to stay healthy. 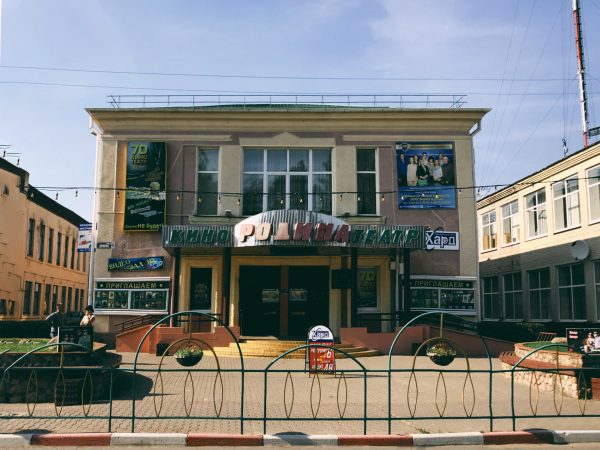 Pastavy (Postov, Postavy, Postawy). So here we are, traveling in Belarus once again. Only recently having passed the Lithuania-Belarus border, we are continuing our journey towards Pastavy. The horizon slowly starts to unfold the enormous chimneys of the new nuclear power plant. It is a truly spectacular view…
In the center of the city, a timeless piece of history stands – a sculpture of Lenin. It is surrounded by a beautiful array of well-groomed flowers. Close by there is an ad of a restaurant, which is doubtfully still open, and an old cinema. But hey, where are all the Jews?
It feels good to return to this region. Time here stands still… Suddenly, your mind is left wondering with just one question. What was life here like before the war? Now it is 2018, and the air is brimming with an indescribable, sort of uneasy and partly peaceful feeling. The only way to experience it all is to visit this history-rich country. And what better way to do so, than with us? 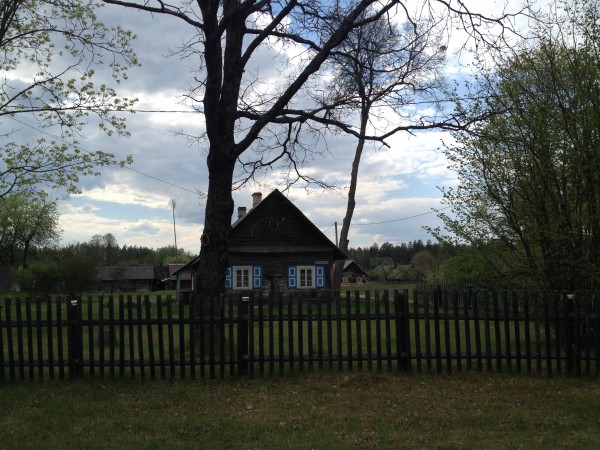 The Eradication of the Jewish People of Musteika and Marcinkonys

Musteika and the neighboring village of Marcinkonys were once home to a thriving Jewish population prior to the Second World War. During the Nazi Occupation of Lithuania, most of the Jewish population of these villages were put into local ghettos and either killed outright or sent to death camps. Some members of the Jewish population survived in the local swamps and forests until the war was over. It is known that while some local villagers tried to help the Jewish population, the majority either remained impartial to their plight or were outright supporters of hunting Jews to be turned over to the Nazi Occupants in exchange for a monetary reward. To this day, it is a taboo topic of discussion in these villages as many locals fear prosecutorial or financial reprisal from the ancestors of their former neighbors. 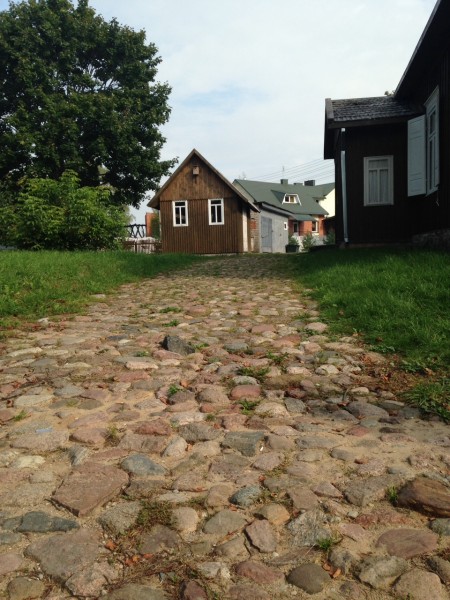 May the discovery of your personal roots start right now!

Have you ever dreamt of visiting your ancestral homeland? Wasn’t it that you end up saying “I would love to go but it’s too far away and too much complicated…” Let us guide you straight and smoothly! Allow our team to share with you the experience and knowledge. May the trip searching for your personal roots bring you joy and inspiring moments! Come to touch the land your ancestors walked on, enter the house they lived in, say a pray where they used to pray and gather, leave a stone on their eternal rest place. After all, we will do everything to enable you to meet local people and their  memories, we will translate you their touching stories. In additional, we are always ready to introduce the modern side of your ancestors’ lands. Feel it! Еaste it! Enjoy it! Keep it in your heart, so that it always brings the smile on your face! Leave our team to start family genealogy reserch and meanwhile simply enjoy waiting the trip. Create your personal and unique tour with our team! Feel welcome and comfortable in the Baltic States and around! 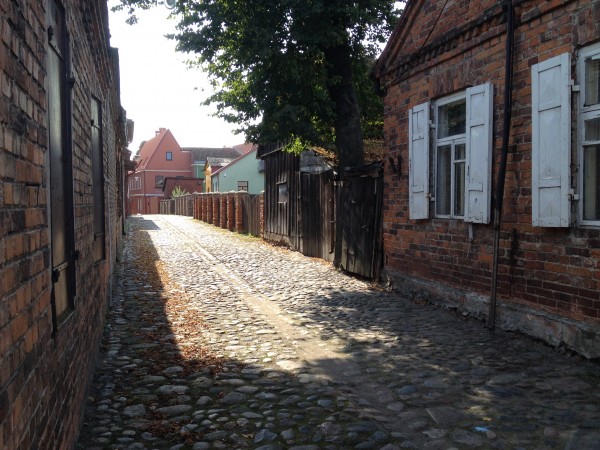 The Day Of Five Shtetls

As the rest of the world on the 6th of September we were enjoying the European Day of Jewish Culture. Different Lithuania actually faced difficulties choosing among the huge variety of fine cultural events, excursions and presentations all over Lithuania! We had ultimately chosen to drive forwards Kėdainiai and its environs, where we explored Jewish heritage with the local professional guides, remarkably educated colleagues of ours. In total that day we visited these following shtetls: Shat (Šėta), Yosvain or Jaswojnie (Josvainiai), Kroki (Krakės), Datneve (Dotnuva) and Keidan (Kėdainiai) of course. One post is not enough to leave all the impressions of what we had discovered, but for sure we will be sharing everything with our dear guest on the future tours! Martynas was so much interested in the authentic wooden houses in Kroki, we would assume still of a good condition! And Eglė was about comparing the ancient Jewish cemetery, the one in Dotnuva attracts by a very special mood, though the cemetery in Keidan are surprisingly well­maintained! The hundreds of Jewish related objects, the tenths of synagogues and cemeteries, the narrow stone paved streets filled with fascinating stories!And so we spent a bright sunny day in the central Lithuania, where Lithuanians still grow cucumbers and tomatoes, which were firstly brought and cultivated here by the Jewish ancestors! 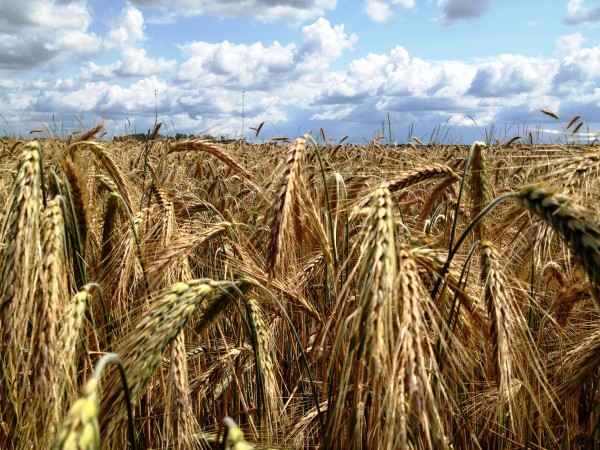 To get closer to heaven, we seek spirituality, to stay alive on this earth, we bake bread. Never mind the tradition or nation, it was always appreciated and respected. We made a small visit in the Jewish cemetery of Nayshtot-Ponivez which occurs in a very close neighborhood of the Karaites’ cemetery.
Driving back on the first turn our eyes were caught by a beautiful field of gold. Stoned, as if it respected the forever tranquility of this saint place. Such a simple and breathtaking minute at once. And so in this mood we left Nayshtot-Ponivez surrounded by slow Nevezis river with the peaceful golden field. Never mind the national differences, the language or the age – me and my dear guests all experienced the same spiritual moment in front of the coming autumn crop.
Next page